A History of the Barber’s Pole 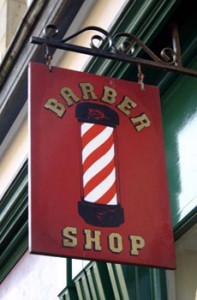 Barber-surgeons were medical practitioners who provided a wide-range of services during the medieval and early modern periods of history. Traditionally, they were trained through apprenticeships, which could last as long as 7 years. Many had no formal education, and some were even illiterate.

Barber-surgeons provided a variety of medical services for their communities. Moreover, because of their varying social backgrounds and relatively cheap prices, they also appealed to a greater number of people in medieval and early modern England. As a result, a person was more likely to visit a barber-surgeon than a physician during his or her lifetime.

So, then, what could a barber-surgeon do for you?

The barber-surgeon’s tasks ranged from the mundane—such as picking lice from a person’s head, trimming or shaving beards, and cutting hair—to the more complicated—such as extracting teeth, performing minor surgical procedures and, of course, bloodletting. It is this last service which epitomises the barber’s pole. 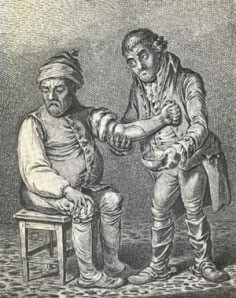 The original barber’s pole has a brass ball at its top, representing the vessel in which leeches were kept and/or the basin which received the patient’s blood. The pole itself represents the rod which the patient held tightly during the bloodletting procedure to show the barber where the veins were located. The red and white stripes represents the bloodied and clean bandages used during the procedure. Afterwards, these bandages were washed and hung to dry on the rod outside the shop. The wind would twist the bandages together, forming the familiar spiral pattern we see on the barber poles of today.

After the establishment of the Barber-Surgeons Company in 1540, a statute was passed that required barbers and surgeons to distinguish their services by the colours of their pole. From that point forward, barbers used blue and white poles, while surgeons used red and white poles.

Today, red, white and blue barber poles are often found in the United States, although this may have more to do with the colours of the nation’s flag than anything else. Some interpretations posit that the red represents arterial blood, the blue represents venous blood and the white represents the bandages. Spinning barber poles are meant to move in a direction that makes the red (arterial blood) appear as if it were flowing downwards, as it does in the body.

Happily, the only thing your barber is likely to cut on your next visit to his shop is your hair! Or so we hope…